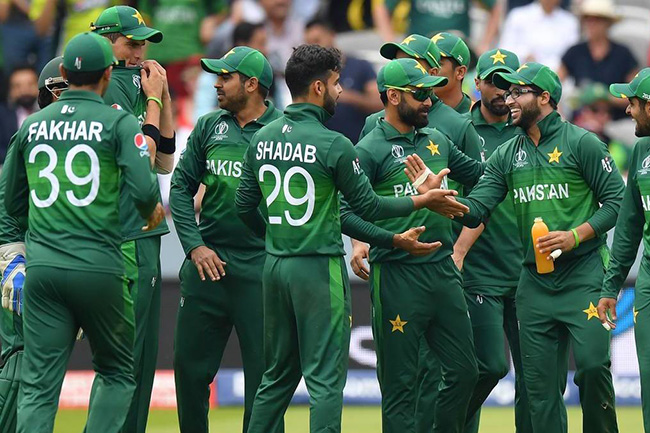 Pakistan Cricket Board (PCB) has confirmed that seven more cricketers have returned positive tests for Covid-19, taking the total count to ten ahead of their England tour. On Monday, Shadab Khan, Haider Ali, and Haris Rauf had tested positive.

The new names on the list are Kashif Bhatti, Mohammad Hasnain, Fakhar Zaman, Mohammad Rizwan, Mohammad Hafeez, Wahab Riaz, and Imran Khan. In addition, the PCB announced one member from the player support personnel had also tested positive for the virus. According to the PCB CEO Wasim Khan, all seven players who tested positive are - like the three who returned positive tests yesterday - asymptomatic. Shoaib Malik, Waqar Younis and Cliffe Deacon have not yet been tested.

That means more than one-third of the 29-man squad the PCB announced for a three-Test, three-T20I tour of England are currently positive for Covid-19, and will have to self-isolate for 14 days. The PCB CEO Wasim Khan announced plans for the team to travel to England on June 28th remained unchanged. The four reserves Pakistan named for the tour of England - Bilal Asif, Imran Butt, Musa Khan and Mohammad Nawaz - have been called up for testing.

“The tour to England is very much on track and the side will depart as per schedule on 28 June,” Wasim Khan said. “Fortunately, all the first-choice red-ball squad, barring Mohammad Rizwan, are negative, which means they can start training and practicing immediately after they have been tested and given the all clear when they arrive in England. As regards the players, who have tested positive, we will continue to monitor and support them, including conducting antibody tests, and as soon as they test negative, they will be flown to join the squad in England. At the moment, they have been advised to go into self-isolation so that they not only recover quickly but also prevent their other family members from being infected.”

The PCB announced that all players who tested negative will assemble in a bio-secure environment on June 24 in Lahore, and undergo a second round of testing the following day. All those who test negative in that second round of testing will depart for Manchester on a chartered flight on 28 June, and be tested upon arrival in England. They will then have to quarantine for a period of 14 days in the country in line with government regulations, but will be permitted to train in a bio-secure facility during this time. Those who have tested positive will self-isolate at home for two weeks, and will only depart for England after returning two negative Covid-19 tests.

The ECB are understood to be reflecting on the impact of the news in conjunction with their medical team, but remain confident the measures put in place will enable the tour to proceed. In particular, they point out that these tests have been conducted almost 6 weeks ahead of the first Test.

Today’s results could well have selection implications for Pakistan, with first-choice wicketkeeper Mohammad Rizwan having tested positive. That boosts the selection prospects of former captain and Karachi native Sarfaraz Ahmed, who was last year removed from captaincy and dropped from all three formats. No player from Karachi returned a positive test, particularly notable since friction between the central government and the provincial government of Sindh - the capital of which is Karachi - prompted the province to impose stricter restrictions than were present in the rest of the country.

“The recent positive tests of some of the fittest athletes, who had not shown any symptoms, clearly reflect the danger this virus possesses,” Wasim Khan said. “As such, and on behalf of the PCB, I once again request the public to strictly adhere to all safety precautions as advised and recommended by the federal and provincial governments to ensure their health and safety as well as of their dear and near ones.”

Today’s developments further highlight the stark challenges of conducting an international tour in these times, with this not the first time the pandemic has affected Pakistan’s preparations for the tour of England. A fortnight ago, the PCB scrapped plans to host a training camp in Pakistan ahead of the tour, with the rapid growth of cases in the country making it impossible to achieve a bio-secure environment. That necessitated bringing forward the team’s departure to England, with the aim of conducting a camp there, where the virus has passed its peak.

Pakistan has seen a surge of Covid-19 cases over the past few weeks, prompting the government to reimpose a partial lockdown earlier this week. The country currently has around 190,000 confirmed cases, which ranks it 13th globally, while it is believed the pandemic has not yet reached its peak.