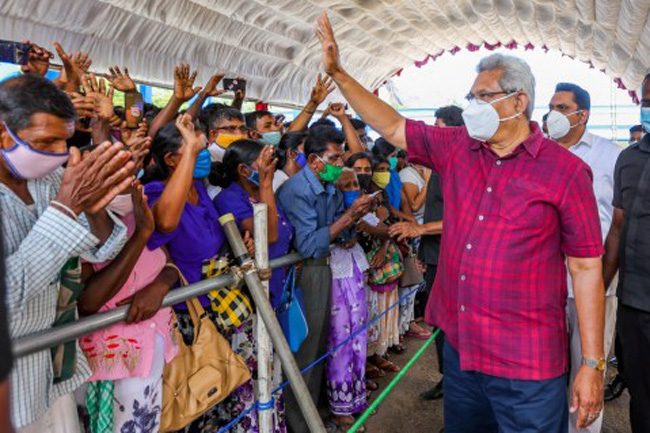 Will not allow destruction of countrys historical heritage  President

President Gotabaya Rajapaksa has reiterated that no room will be left for anyone to destroy the historical heritage of the country or to cause damage to places of worship.

A comprehensive programme will be designed in order to preserve the heritage of Wellassa whilst protecting places of worship of all faiths, President Rajapaksa said addressing a public gathering organized by candidate Wimaladasa Galgamaarachchi in Wellawaya, Monaragala on Friday (31), the President’s Media Division (PMD) said.

People at the venue have requested the President to take measures to protect temples of historical value from treasure hunters.

Agriculture in the area could be further enhanced by rehabilitating tanks scattered across the district including Buduruwagala and BathalaAra, they have pointed out.

At the gathering organized by candidate, Padma Udayashantha at Buttalla weekly fair, the President was requested to set up a Presidential Task Force on preserving the historical heritage of UvaWellassa as well.

People commended the decision of the President to establish an investment zone in Monaragala.
President said measures will be taken to commence pumpkin and watermelon based by-products and to promote pepper and orange cultivation.

The President who participated at the public meetings organized by candidate Shasheendra Rajapaksa and candidate Sumedha G. Jayasena at the Monaragala Weekly Fair premises also engaged in a cordial discussion with the people gathered at the venue.

President Rajapaksa responding to the issues faced by the pepper cultivators said that a comprehensive strategy will be implemented to uplift the pepper trade which has collapsed as a result of the re-export of pepper.

The President requested the pubic gathered at the venue to extend their support to form a strong and stable Parliament to accomplish promises in ‘Vistas of Prosperity and Splendour’ national Policy Framework successfully.

President Rajapaksa attending the public meeting organized by candidate Kumarasiri Rathnayake at the Dobagahawela Weekly Fair premises promised the people gathered at the venue to implement the Kumbukkan Oya water supply scheme as a solution to the drinking water issue of the area.