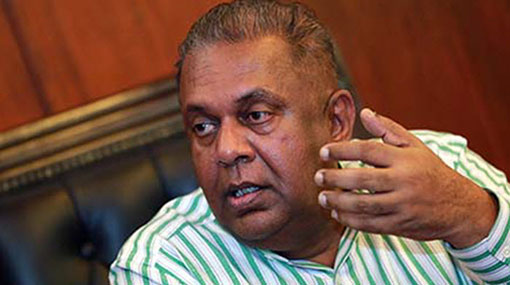 Former finance minister Mangala Samaraweera says that the Sri Lankan people and state are setting an example for the entire region.

“Unfortunately, this is not entirely true of our government,” he said, issuing a statement.

First, the Government initially ignored a number of warnings, including warnings raised in Parliament, and failed to take adequate preventative measures, such as in the case of travelers from Italy, he said.

He said there are also reports that persons near and dear to those in positions of power and responsibility have been sent through the VIP lounge to avoid the screening and quarantine process.

“That said, once the WHO raised the alarm, the response has been largely swift and effective. We welcome the fact that the government is following scientific and public health advice.”

“With one important exception, which is my second point.” He said that schools were closed, public places shut, holidays granted and the nation was coming to a stand-still, but the Elections Commission and political party offices were hives of activity.

“What choice did they have? The country was readying for polls. This was clearly a grave public health hazard,” he said.

Samaraweera said that elections are, after all, the precise opposite of social distancing as they involve campaigning, nominations and tens of thousands of public servants organizing a logistically complex operation over months.

“There was no need for elections at that time. The President, although briefed on the coronavirus threat, decided to conduct early polls.”

The former UNP MP stated that the Parliament’s term only finishes in August and that polls could have been held then. “Instead, the President chose to go ahead with polls. Even after the entire country was asked to stay at home the President did not revoke the Election Gazette.”

He stated that this is why the Elections Commission postponed elections the moment it had the power to do so, on the close of nominations. The Commissioners, sought public health advice, and learnt it was the responsible and right thing to do, he said.

“The President had access to the same public health advice. Regrettably, his actions appear to have been dictated by other considerations.”

Fourth, although it is not yet apparent, perhaps the gravest error the Government has made is its failure to convene Parliament, charged the former minister.

He added: “A pandemic of this magnitude calls for the entire system of governance to work together. There is only so much the President, Prime Minister and Cabinet can do alone.”

“This will become all the more visible should the pandemic mutate into an economic crisis. In order for Sri Lanka to meet both these challenges, it needs to have all arms of government active and working.”

“Without Parliament, the government is fighting the virus and its effects with one-hand tied. Without legislative approval, the debt-ceiling cannot be raised to provide economic relief. Nor can any other economic relief measure involving government revenue or expenditure.”

He stated that in challenging times, it is also constitutionally proper to have the people’s representatives meet to steer the country through these perilous waters and that Section 70(7) of the Constitution, which empowers the President to convene Parliament in an emergency, exists for precisely such an eventuality.

“Mr. President, I believe it is your duty and responsibility to ensure that Sri Lanka has a legislature at this time of emergency.”

Even if Parliament, on public health grounds, cannot meet as a full House, there are other alternatives, he said, adding that the minimum quorum for Parliament to meet is 20. By mutual agreement, those twenty members can reflect the composition of Parliament, the ex-MP said.