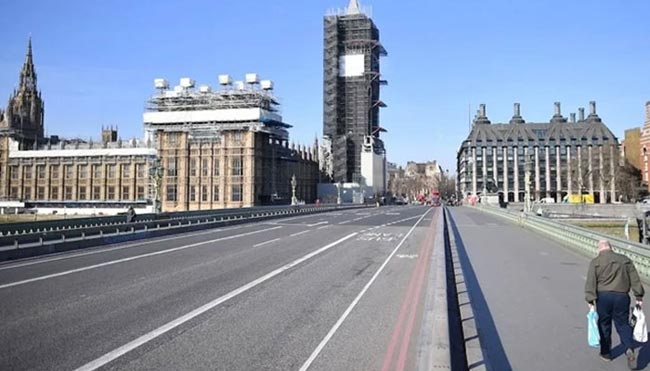 One third of humanity under coronavirus lockdown

More than one billion Indians went into lockdown Wednesday, leaving a third of the planet now under orders to stay at home, as the United States vowed to spend $2 trillion to counter the economic harm of the coronavirus.

Europe remains at the heart of the epidemic, with first Italy and now Spain’s death toll overtaking that of China, while Britain’s Prince Charles became the latest prominent figure to test positive for the COVID-19 disease.

Spain saw the number of deaths surge to 3,434 after more than 738 people died in the past 24 hours, following Italy in overtaking the figure in China, where the virus originated late last year.

Coronavirus cases are also spreading in the Middle East, where Iran’s death toll topped 2,000 on Wednesday, and in Africa, where Mali joined all seven of its neighbours in declaring its first cases -- two nationals who arrived home recently from France.

Government policies and the capacity for virus testing vary widely around the world, so the true extent of the pandemic is difficult to estimate, but over 20,800 deaths with 1,953 new deaths and more than 460,000 cases have been declared in 196 countries and territories since the epidemic first emerged in China in December. While 113,800 patients recovered from COVID-19 across the globe.

The economic damage of the virus -- and associated lockdowns -- could also be devastating, with fears of a worldwide recession worse than the financial meltdown that occurred over a decade ago.

But financial markets soared as the US Senate and the White House agreed a stimulus package worth roughly 10 percent of the entire American economy, an injection Senate Majority Leader Mitch McConnell said represented a “wartime level of investment”.

President Donald Trump has voiced hope that the United States will be “raring to go” by mid-April, but his optimism appeared to stand almost alone among world leaders, who were ratcheting up the movement restrictions in a bid to stifle the spread of the disease.

India ordered its 1.3 billion people -- the world’s second-biggest population -- to stay at home for three weeks. Prime Minister Narendra Modi’s “total lockdown” call doubled the number of people around the globe under some form of movement restriction to more than 2.6 billion people. “To save India, to save its every citizen, you, your family... every street, every neighbourhood is being put under lockdown,” Modi said in a televised address.

In China, where the new virus emerged last year, authorities loosened tough rules on the 50 million people in Hubei province on Wednesday after a months-long lockdown as the country reported no new domestic cases.

While, Saudi Arabia on Wednesday sealed off the capital Riyadh and two of Islam´s holiest cities and extended curfew hours as it reported its second death from the new coronavirus. The kingdom barred entry and exit from Riyadh as well as Makkah and Medina and prohibited movement between all provinces, the official Saudi Press Agency reported, as the health ministry said the total number of infections spiked to 900.

Saudi Arabia, which has reported the highest number of infections in the Gulf, on Monday, began implementing an 11-hour nationwide curfew -- starting at 7 pm -- to limit the spread of the deadly COVID-19 illness. The curfew hours were brought forward to 3 pm in the three cities, SPA said citing measures approved by King Salman that will take effect from Thursday.

Authorities plan to implement the curfew for 21 days and have warned that transgressors will be fined 10,000 Saudi riyals and could face jail for repeated breaches. The health ministry on Wednesday said a resident of Makkah was the second person to die from the disease in the kingdom.

The king will chair an emergency virtual summit of leaders from the Group of 20 major economies on Thursday to discuss a global response to the coronavirus pandemic. Meanwhile, Iran will ban intercity travel within days as it finally gets tough with the coronavirus that has killed more than 2,000 people in one of the world´s deadliest outbreaks, officials said Wednesday. The strict new measures come after weeks of cajoling largely failed to prevent hundreds of thousands of Iranians taking to the roads to visit family for the two-week Persian New Year holiday.

“New journeys will be banned, leaving towns and cities will be banned,” government spokesman Ali Rabii announced, hours after President Hassan Rouhani revealed the government was poised to introduce “difficult” new measures against the outbreak. “People should return to their home towns as quickly as possible,” Rabii said. “Of course, the security forces are going to stop it,” he said, referring to travel on Iran´s major highways. Iran on Wednesday announced 143 new deaths from the coronavirus, raising the official death toll to 2,077.