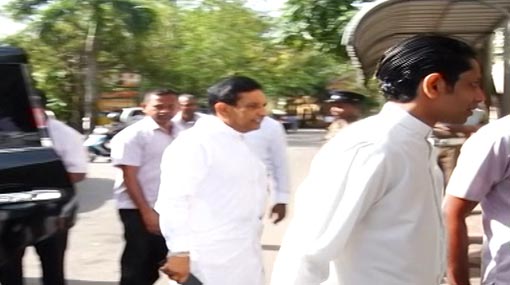 UNP Parliamentarian Dr. Rajitha Senaratne, who was discharged from hospital last night, has appeared before the Criminal Investigations Department (CID) to give a statement.

He arrived at the CID premises this afternoon to provide a statement on the “white van” press conference, as per the orders of the court when he was granted bail.

The former Health Minister was discharged from the private hospital in Colombo last night (13), after receiving medical treatment for the past 19 days.

Meanwhile the revision application filed by the Attorney General against the order of the Colombo Chief Magistrate granting bail to Dr. Senaratne, has been fixed for support before the Colombo High Court on January 17.

The court yesterday also issued notice on MP Rajitha Senaratne, former SPC chairman Rumy Mohomad and the two individuals, who had attended Rajitha’s “white van” press briefing, to appear before the court on that date.

The Attorney General had filed the revision application on January 08 challenging the decision of the Magistrate Court to grant bail to the Parliamentarian.

On December 19, Senaratne had filed an anticipatory bail application seeking the prevention of his arrest, which was rejected by the Colombo Chief Magistrate’s Court.

The following day he filed another anticipatory bail application. However, four days later the Colombo Additional Magistrate issued a warrant to arrest the former Health Minister, over the controversial press conference.

On December 26, it was reported that Senaratne was admitted to the Cardiovascular Intensive Care Unit (CICU) of Lanka Hospitals in Narahenpita.

The next day he was arrested and remanded over the “white van” press conference he had called in November, but he continued to receive treatment at the hospital.

On December 30, Colombo Magistrate’s Court ordered to release the former Health Minister on bail. He was granted bail a day before the second anticipatory bail application was scheduled to be taken up for consideration.