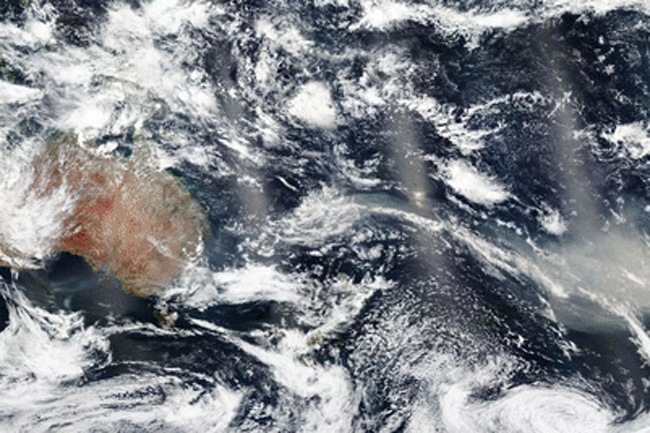 The smoke from the Australian bushfires is so severe it is expected to complete a circuit of the Earth, returning to the country’s skies from the west.

The smoke has billowed into the lower stratosphere, reaching 17.7 kilometres above sea level, US space agency NASA said this week.

It comes as major Australian cities are still struggling with low air quality from bushfire smoke. Wangaratta on Tuesday morning was the third worst city in the world for air quality, bumping the Melbourne suburb of Doncaster from fifth to sixth place. The Indian city of Singrauli was the worst, according to the World Air Quality Index project.

Overnight, Melbourne’s air quality was the the poorest across the globe, Victoria’s Chief Health Officer, Brett Sutton, said. He expected it would improve during the day on Tuesday.

“The smoke is expected to make at least one full circuit around the globe, returning once again to the skies over Australia,” NASA said.

“Over the past week, NASA satellites have observed an extraordinary amount of smoke injected into the atmosphere from the Australian fires and its subsequent eastward dispersal.”

The smoke is having a dramatic impact on nearby New Zealand, which has experienced severe air quality issues and a darkening of the colour of the snow on the mountains.

NASA satellites show smoke has travelled more than 6500 kilometres away from Australia, with some of it reaching Chile, where hazy skies and colourful sunsets have been reported.

The space agency has also labelled Australia’s bushfire-generated storms, or pyrocumulonimbus events which have been exacerbating fire activity this week, as rare.

Mike Fromm of NASA’s Naval Research Laboratory said that by the agency’s measures, it was “the most extreme pyrocumulonimbus storm outbreak in Australia”.

A pyrocumulonimbus occurs when moisture trapped in the smoke condensed in the cold upper air produces a cloud, which then produces its own lightning.

The smoke has been tracked by satellite data used to create an ultraviolet aerosol index.

The UV index is particularly well suited to tracking smoke from pyrocumulonimbus events, according to NASA Goddard research scientist Colin Seftor, as the higher the smoke plume, the larger the aerosol index value.

“The aerosol index values produced by some of the Australian pyrocumulonimbus events have rivalled the largest values ever recorded,” he said.